Since the decision had been made to open an English pub, the next logical question was, “Where?” John Cordwell wanted to stay in Lincoln Park close to his home. He knew Lincoln Park, and he knew its people. With the help of a real estate agent, he hunted high and low. One spot on Lincoln Avenue, just north of Wrightwood seemed to be right. However, “Seemed” was not close enough. The building was a three flat, and Jon could not make the plan fit the reality of the building, nor the location. “Not enough traffic,” he announced. So that site was tossed aside. The next site was suitable, but still too far away. Tired, early one morning, he was having a cup of coffee at a French bakery just next door to the Biograph Theater on Lincoln Avenue. He happened to look out the window and saw that a building with a bar was for sale just across the street. The sign of the establishment read “Dirty Dan’s Western Saloon” and it was, too. A meeting was arranged between the owner, John and Colin. The place was smoke-ridden, rat infested, filthy, grimy, but it was unpleasant. The owner, Dan Danforth was an old, alcohol-sadden, toothless gem, without one redeeming defect. A price was set, combining the building and the business. The purchase was made, and The Red Lion Pub was born.

The refurbishing took a few months. Evidently, Dirty Dan’s Western Saloon was the only restraint in Chicago where the rats died of food poisoning. The final obscuration of many a rodent was discovered in the clean-up and reconstruction. When all was done, Dirty Dan’s Western Saloon had transmogrified into a passable version of an English pub. Opening night was November 16th, 1984. 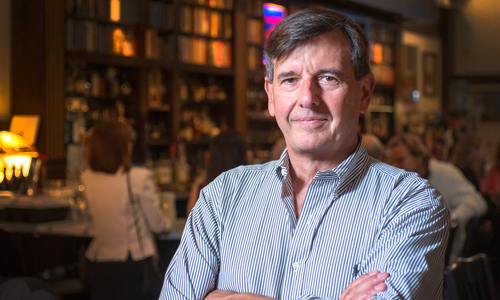 Colin Cordwell, legally commenced in the bar business A.D. 1977, shortly after his 21st birthday. He commenced illegally in the bar trade at the tender age of seven. “I grew up in the golden age of using grammar school-age children as bartenders at family parties. Serving drinks was easy, listening to people’s problems was difficult. I had no training in clinical psychology. I didn’t know the first thing about transference, counter-transference, reaction-formation, or borderline personality disorder. I found out later, though.” Cordwell had mastered the old-fashion by the time he finished third grade, the Manhattan by seventh grade.

In later years he drifted into theater, and began acting. He quasi-pursued a career in theater for sixteen years, all the while tending bar. He developed most of his theatrical talents while making drinks, including timing, blocking, and forgetting his lines. He worked in many venues, never really thinking that life as a publican would be his calling. “I really thought that I would be an actor. However, done well, the pub life is theater.” In late 1983, his father, John Cordwell, in a mad moment said, “Why don’t we open an English Pub?” Having been a successful, and renowned architect in the city of Chicago for the last 40 years, John decided to fulfill an earlier dream. “Designing buildings has run its course for me, now it’s time to have fun.” For Colin, he quipped, “I was making too much money in theater, I’m trying to get into the bar business.”